Hilda and the Black Hound was given to me for my Birthday. I read it the next day the whole book!!!

Hilda is just an ordinary girl in a tent in a house. a letter slaps on her mother’s window, it says, Join 1st Trolberg Sparrow Scouts. So Hilda’s Mother drives Hilda to the Scout Hall and stays, because Hilda is getting Invested into the pack!! She gets her first woggle and scarf!! On the way home Hilda’s Mum sees something out the window, it is a big black dog!!!! For the rest of the trip Mum is a bit uncertain. They walk to the supermarket to stock upon food. On the way home from the supermarket Hilda sees a home less little Nisse sitting on the street Hilda’s Mum tells her off for talking to it, she says it is a ‘House Spirit’ it steals and runs away, or turns invisible!!

Will Hilda ever see the Nisse named Tontu, or will the whole of Trolberg get eaten by the black Hound!!!

I love this GRAPHIC NOVEL because it is one, I love GRAPHIC NOVELS because they have more words than picture books, and more story just told through pictures!!! This is a great one to read if your not a keen reader!!

I just want to give a shout out to Bill for giving me this book!! 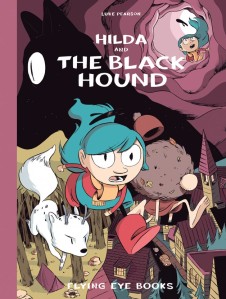