Ellie and Fred Stone are twins, not identical twins, because they are boy and girl. They both love lots of things – Superheroes; Japanese fantasy animations; films; comics; maths. But best of all, Video Games. Their Favourite games were FIFA , Street Fighter, Super Mario and Minecraft.

Eric Stone was Ellie and Fred’s dad. He is fat, he was addicted to bacon sandwiches. Janine Stone was glued to Cash in The Attic, the TV show. Margret Scratcher was a cat, that Janine always loved to have draped over her arm.

Eric sat on Ellie’s controller. It broke. The next day Fred and Ellie were at school. Ellie went into the Computer Room, Fred followed. The Computer room wasn’t a room, it was a cupboard. A man appeared on the screen on the laptop. When they got home, THE UNIQUE CONTROLLER HAD ARRIVED…..

I love this book, because it is very exciting, and I couldn’t take my eyes off it!!!!!!!! (Don’t tell mum, but I stayed up a bit late reading it)

By the way, I am doing an event with David Baddiel for the Hertford Children’s Book Festival!! 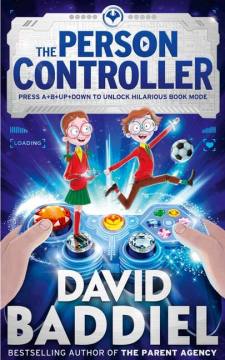