Choices are what make us who we are in life, and this has never been truer in the Ash Mistry series of books. Especially when some of the choices mean the difference between normal, everyday life and a hell plagued with demons.

In the first book, Ash Mistry and the Savage Fortress, we are introduced to a brand new hero with a witty personality and a clumsy demeanour, Ash. He is drawn into the storm surrounding Kali, the goddess of Death and powerful. She can give great power to her worthiest heroes; for instance, to vanquish the evil demon king, Ravana, permanently. But she can also give the power to awaken him, which is exactly what some want. Because of this, a power struggle unfolds where innocents are swept up in the battle to both free and restrain him. She demands much though in return for her powers…

Ash Mistry is, in the words of the book, a “slightly geeky boy”. He’s visiting his aunt and uncle in Varanasi, India, and is growing tired of the incessant heat and noise. It’s about to get much worse though. When Lord Savage, a rather vicious and spiteful businessman, and his rakshasa demon henchmen come after him and his family, he needs to learn how to be a hero. Even with the help of wise man Rishi, surly Ujba, mysterious rakshasa Parvati and his own little sister Lucky, Ash is going to have trouble beating the bad guys. He’ll just have to find a way. And sometimes when the only way is the hard way, the hero just has to accept that path, no matter what happens.

The characters can be quite ruthless, but that’s what makes the book so engaging. You’ll find yourself loving some, and absolutely hating others; there were a couple that I couldn’t wait for their guts to be spilled, bloodthirsty person that I am! But be warned,the content can be quite gory; personally, I loved it! Let’s put it another way, I’ve just spent the remainder of my Christmas money on the rest of the series!

If you’re a fan of the Percy Jackson series, this is definitely for you. Morals and duty collide with personal love and family, and the readers will find that they’re always willing for more. If I have any criticism, I would say that some of the characters’ motives for their actions were unclear to me; however, the book endings don’t disappoint. Enjoy… but then I know you will!

** Pheebs, alongside Mango Bubbles Boy, is reporting from this year’s Chipping Norton Literary Festival THIS MONTH! Sarwat Chadda is among the many fabulous authors appearing there. More information about events for children and young people here. PLUS Pheebs has interviewed Sarwat and you can read that here! 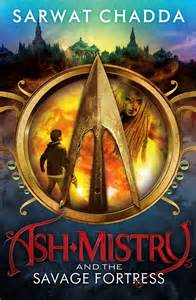