The Boy at the Top of the Mountain – John Boyne. Reviewed by Banana Girl (10)

We have always thought about how Hitler influenced us and the Allies in the Second World War. But have we ever thought about how it influenced not only his own people, but those close to him, by convincing people to think that you were either powerful and worthy, or worthless.

Pierrot was only seven when his mother dies. He lived in a flat in France, although he was only half French because his father was German. His father had died a little while before, hit by a train whilst he was starting to go mad with the things he had seen in the First World War. Pierrot stayed for a while with his deaf Jewish friend, Anshel Bronstein, but then left and went to an orphanage. He was not, however in the orphanage for very long time, when a letter arrived from his aunt Beatrice, whom he had never met, asking him to come and stay with her in Germany. She was a housekeeper to no other than Adolf Hitler himself. At first though, Pierrot did not realize that the ‘master’ of the house was Hitler. As time went by, and the Second World War came, being with Hitler took an effect on Pierrot, (who had to call himself Pieter to hide his French origins, and was advised by his aunt not to talk Anshel because he was Jewish, which shocked him) because he was manipulative and would often talk to Pierrot about politics, and his plans to take over the world. Soon Pierrot feels as though he himself was becoming a monster and a killer, because some of his actions caused several people to lose their jobs and to be killed…

I found this fact quite peculiar: Hitler was an animal lover! He was also apparently vegetarian, and had several pets that he adored.

DO NOT READ THIS BOOK IF YOU HATE DESPAIR AND UNHAPPINESS AND DEATH AND FEAR. This book is quite short and quite readable, but it helps to have knowledge of the Second World War before you read it. However sad this book is, this was unfortunately the kind of thing that happened, in both the world wars. What I found most fascinating about this book was the way Hitler and his supporters saw things. This book covers a tricky subject. Many thought they were doing the right thing, but it is a bit scary that just one person can influence the actions and minds of so many people. 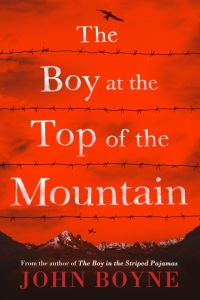 Banana Girl, John Boyne, The Boy at the Top of the Mountain