Although books in the genres of adventure, mystery and fantasy often enjoy a wide amount of young readers, steampunk stories have gained popularity in the recent years. I certainly have read many fascinating children’s novels that are part of the steampunk movement, from Airborn, The Nine Pound Hammer, and The Invention of Hugo Cabre to Here Be Monsters! (from the Ratbridge Chronicles). Cogheart, Peter Bunzl’s fantastic debut, joins this list; it is a tale of courage, loyalty, and trust that many will enjoy.

The backdrops of these books of the steampunk tradition often borrow the aesthetics of the 19th century, particularly the Victorian Time, while at the same time they show a keen interest in science fiction. These stories are filled with intricate machines, and retro-futuristic gadgets and gears are especially at use. Cogheart sets against a time part Victorian era, part Industrial Revolution, which obviously means machines, clockwork, screws, bolts and of course, cogs are all involved.

In the late 1800s, a woman is dead. Her husband is missing. Abruptly, their young daughter, Lily Hartmann, finds herself brought back to Brackenbridge, her father’s manor, away from her torturous boarding school.

Where is her father, and his loyal mechanimal Malkin?
Why is her governess, Madame Verdigris, so keen on bringing her back? And what are Verdigris’ real intentions?

Meanwhile, Malkin, the devoted ally of the Hartmanns, seeks help from Robert Townsend, a clockmaker’s apprentice. Accompanied by Malkin, Robert embarks on an adventure to the very heart of London. The duo encounter armed aeronauts, mysterious crash sites, and dastardly villains in this stunning tale, complete with thrilling mysteries and looming danger. And of course, spiffing details of steampunk.

This subject recalls Mortal Engines, echoing Philip Reeve’s futuristic, steampunk adventure, with half-robots called ‘Stalkers’ relentlessly hunting down the protagonists. Yet Bunzl’s story, in his particular way, puts a great emphasis on the mechanicals, and I think it stirs us to imagine the sights and sounds, letting us follow the story closer.

In Cogheart, Lily first comes across uncertain, but as the story progresses, she is forced to take up more responsibility, and it takes much bravery to counter danger and obstacles. Fortunately, Lily does not have to overcome these challenges all by herself; she is aided by Robert and Malkin. The three learn to work with each other, gaining each other’s trust amidst bickering and disagreement, but soon enough become firm friends.

Several books have stood out to me that involve friendship, most recently and notably the Wells and Wong series by Robin Stevens. Like in real life, a friendship between two people isn’t always smooth all the time, for there are bound to be arguments and fall outs, as well as comfort and joy. Another book that comes to mind is Jordan Stratford’s The Mystery of the Missing Moonstone, which tells two female friends who apprehend criminals and solve mysterious cases in early 19th century. These two lead characters are very different in personality, but when they decide to form a detective agency, they will have to learn to work together.

My favourite character has to be Malkin, Lily’s mechanical fox. This lovable mechanimal is everything he needs to be, taking a role like Pantalaimon from Philip Pullman’s His Dark Materials—loyal, cautious, devoted, one of my favourite animal characters from books so far.

However, not all of Bunzl’s characters are as amicable as the benevolent Malkin; Roach and Mould, two ex-army policemen, will last an impression in your mind that you swear to forget, but can’t. These characters make the perfect villains. I remember Roald Dahl once said that “Antagonists must be so horrendous that readers will literally enjoy the moment they are demolished.”

Another great character is Mrs Rust, a robotic servant and friend of Lily. She is what you could call a motherly figure, perhaps evoking the role of Ma Costa from His Dark Materials. It may seem strange that she is one of Lily’s friends, but the question begs, how can a robot possibly be friends with a human? Assumably, they don’t even have feelings!

This was a question asked commonly in the steampunk genre, Bunzl has, with Cogheart, answered it for us. If you enjoyed stories like His Dark Materials series, and films by Miyazaki (Castle in the Sky, Howl’s Moving Castle, Porco Rosso, produced by Studio Ghibli), Cogheart is one you should definitely try your hands on. Bunzl’ debut is absolutely impressive—the writing, setting, the characters, the plot—and vivid in its imagery, all of it tells me that Bunzl will be an amazing writer to look out for.

So.
Will Lily find out what Madame Verdigris’ plan is?
What are Roach and Mould up to?
And, most importantly… where is John Hartmann?

This book will be published in September. 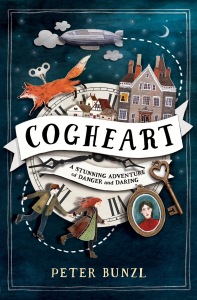