The Diary of Anne Frank by Anne Frank. Reviewed by Banana Girl (11)

I read this book because I had heard about it a lot, and it is a very famous book. I also had just finished reading a book set in World War Two, (the Boy at the Top of the Mountain) and we had World War Two as our history subject at school. So all of these things made me really want to read the diary, so when I got it I was super excited.

Now I am sure lots of you have heard of the Diary of Anne Frank, and for those who haven’t, it is the words (translated from Dutch to English) from Anne Frank’s Diary during the Second World War. Anne Frank (who is thirteen)  and her Mother, Father and Sister all go into hiding in Holland because of the war and to escape the Nazis. The Nazis didn’t like gypsies, disabled people and Jews.

Anne and her family are Jewish. At first Anne thinks it is all a big adventure. They live here for two years with another family, never going outside once, for the whole time they are there. There are eight people living in a large attic, which after a while would have been quite claustrophobic. Unfortunately they are betrayed, and are given to the Nazis. None of them, apart from Anne Frank’s Dad, Otto Frank, survive. Otto Frank found his daughter’s diary and had it published.

I think Anne must have been quite resilient, because she often told her Diary, whom she addressed as ‘ Kitty’ that the other people who were in the attic with her were being quite unkind to her, but of course she couldn’t go away from them, so just had to keep her mouth shut. She often used her diary as a way of escape from the boring and annoying life in the attic. I would have just gone hyper, because I would have no other way to spend my energy. This diary gives you a detailed insight to the world of someone in hiding, and what thoughts go through people’s heads whilst at a frightening time. I really enjoyed this diary, although it is very upsetting at the end. 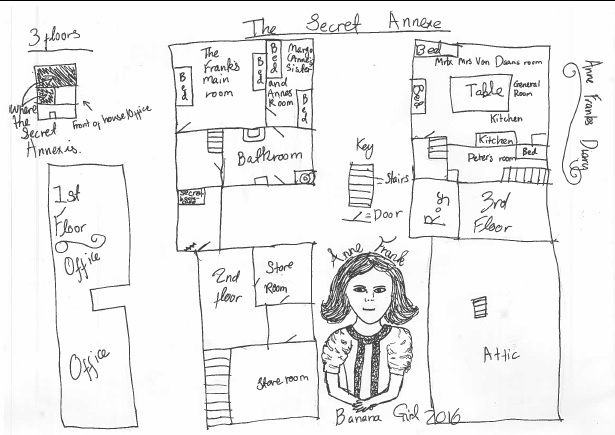