The year is 1990, Nelson Mandela has just been released from prison, and Spud Milton is starting his first year in an Elite Boys’ School. Starting a new school is hard, but for some reason Spud’s start is harder. His dorm – the Crazy Eight, Rambo, Boggo, Gecko, Rain Man, Simon, Mad Dog and Fatty – are forced into night swimming, by Rambo, which ended in Fatty getting stuck in the window of the chapel. But thanks to Rambo’s story, the Crazy Eight got away.

That was only the beginning of Spud’s troubles. As a school tradition, on every pupil’s birthday, his dorm mates give him a nasty surprise. On Boggo’s birthday the Crazy Eight gave him a hogwash (they stuck his head in a toilet, and flushed it). When Spud’s birthday came around, he was really nervous, he thought he was going to get away with it, but his dorm mates carried him to the bogs, but instead of dragging him into a toilet stall, they dropped him on the floor. standing above him was Rambo with a black shoe brush! WHAT IS ABOUT TO HAPPEN?! I’m not gonna ruin it for you! READ IT!!

This is a great and really funny book! Although I didn’t understand all of the references, because John van de Ruit is South African. But it was still really good!! 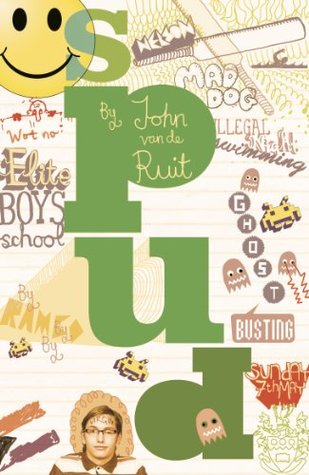