Eragon never expected to find a dragon egg in the woods near his home. He was, in fact, only a poor farmer boy. And dragons were said to be extinct. But when he finds the egg, his world is thrown out of orbit.

Soon, he finds himself on the run, with a storyteller and a dragon by his side, hoping to outrun the king’s soldiers to safety. Can he reach his destination? And if so, how much will it cost?

This book is a legendary. Anyone who loves magic should read this. But it’s a bit long, and will take some time. I never would have expected someone to think of something like this. It’s awesome. 🙂 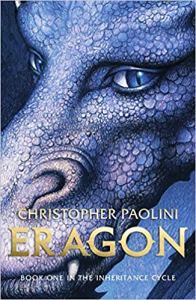