1) Why did you start writing?

Because I couldn’t stop telling stories. I was making them up before I could actually write. I would just corner the nearest available adult and tell them my story! Stories are how I make sense of the world – I take something that has happened to me, or that I’m worried about, and turn it into fiction.

2) What was the name of your first unpublished story?

I’m not sure – but it was either about Peter Rabbit or the Teenage Mutant Ninja Turtles. Later I was very into writing stories about my Sylvanian Families.

3) Who inspires you to keep writing?

Partly writers like Agatha Christie, partly my friends and family (I always have a wobble during each first draft, worrying that I’m actually rubbish, and they have to calm me down) and partly my readers. It matters a lot to me that there are people out there waiting for my next book!

4) Why did you decide to make your books set in the past?

Partly because I am a history nerd. The 1930s are so interesting, because Britain had just been through one war, and was on its way to another. Partly because I love Agatha Christie so much, and many of her most famous books are set in the 1930s. And partly because setting a murder in the past makes it feel less scary, more like a story. I get away with so much more than I could if Hazel and Daisy were solving crime today!

5) Do you know what will happen to Daisy and Hazel when they grow up, will they become proper detectives?

I do! During WW2 Daisy becomes a spy, and Hazel becomes a Bletchley Park codebreaker. After that … I’m not totally sure, but I do think that they probably will set up their consulting detective agency!

6) Which of your books is your favourite?

The one that makes me think most is Arsenic for Tea. My favourite mystery plot is First Class Murder. And my favourite book to write was Mistletoe and Murder. I kind of love them all!

7) Will you always write crime books, or will you move away?

Always! I might write something that doesn’t seem on the surface like a crime novel, but I think I’ll always use it as a plot structure.

Marple! … but if I have to choose, Poirot. He’s so clever, and so funny. I love him!

9) If you could commit a crime and get away with it, what would you do?

Writing murder mysteries has sadly convinced me that I could never actually murder anyone. Even if I technically got away with it I’d feel too guilty! So I’d probably have to choose something money-related and a bit Robin Hood-y, like wiping the records of debt collection companies for ever.

10) What is your favourite pastry?

Cinnamon buns! And for the record, the best in London are from Bageriet in Covent Garden.

Read my reviews of some of Robin’s brilliant books. 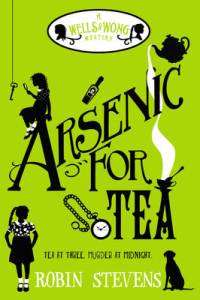